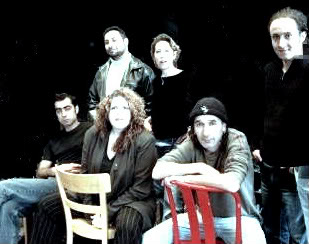 Following is a short summary of the WhiteFlag story.

First tho’ it is vitally important to understand some basic history. There is both a video and a written stuff relating to all of this.

It is easy to romanticise this story and ignore some if not the major issues going on in the background.

From the WhiteFlag concert in Luzern at the K.K.L  2005

Playing With The Enemy Doco & Interview with Arli Liberman 2005

Link to full documentary-‘Playing with the enemy’  produced by ANTV in 2005;

…”WhiteFlag met at a fundraiser for – channels for

The idea was to produce a one-time only kind of concert,

whereby Palestinian musicians from Gaza jammed along side

Aviv, we all had an incredible time on stage. It wasn’t planned or

scripted. It was all about a genuine burst of energy and emotions

through musical dialogue. In fact, we so enjoyed it, we decided to

produce another concert for “windows” just to be able to

experience it once again. The venue was packed. The vibe was

electrifying… something stronger than all of us were born”.

Yassin) formed itself upon realizing that all members shared the

“At first, “windows” supported us with all the production related

details, such as making sure our Palestinian friends could make it

to rehearsals… “. “However, we soon realized that our great

friends at “Windows” had an agenda of their own,

understandably, and we wanted to be independent. That is,

totally free to do what we wanted to do. Music!!!

No politics, no agendas, no forced upon ties and connections, no

hidden messages. A bunch of musicians playing together…”

A very simple vision, indeed, but in a very complicated region, no

Two years and twenty gigs or so later, the second Intifada

broke out. In fact, WhiteFlag was to appear on stage one day

after the initial wave of violence took place. The debate back

stage was whether to have the concert take place as originally

planned or cancel it following the current events. As always,

WhiteFlag ended up sticking to their initial set of priorities. They

went on stage to perform opposite a packed venue.

members could not possibly get together under one roof to

continue playing. The situation in the Middle East was at its

Then, a real breakthrough and lots of assistance came from an

Netherlands, featured WhiteFlag on one of their documentaries

shot in Israel way back during 2000. One day, and all these years

later, the phone rings, and I am surprised to here ANTV on the

other end of the line, asking about WhiteFlag. They expressed

a documentary about this whole story. Guess what we said?” Yup,

as always, the answer was emphasizing wanting to play music

The summer of 2005 was a unique and wonderful experience for

WhiteFlag. The band had the opportunity to finally record their

first CD ‘EXILE’, rehearse and perform at some wonderful

venues; Montreux Jazz Festival, KKL in Luzerne… and be

together as a regular working band.

back to Gaza, married and had a baby, Shadi  remained in

Switzerland, Katja returned to San Fransisco and the other

Israelis went back to Tel-Aviv, Israel … and yet somehow, the

initial vision of us as a band stayed in all of our hearts.

and spent their time editing, recording and creating the CD

Project came into being; a core group of musicians that could meet

performing internationally, hopefully meet up with other WhiteFlag Project

5. Down on the Street